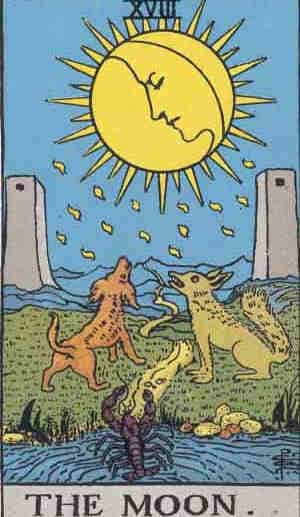 The Moon Card shows a moon disc illuminating a wolf and a dog or a young and old person as two contrasting sides. This Card symbolize a different approach to the subconscious. Its often presented as a drawing of a woman and behind her there is a water flooded with the glow of the moon. The Card has a lot of meanings aimed at the subconscious, getting to know the human psyche and can have a deep mythical meaning. In the light of the moon mystery situations can takes real shape. The card tells about a change in worldviews and can mean a turning point in life.

Card can represents places like spa, swimming pool, lake, sea.
Listen to your subconscious, look for answers and hints in your dreams.

The Reversed Moon tells us about lies, threats and false accusations. It can also be a fear, lack of self-confidence or some irrational behaviours.

The Moon Card point attention to uncertainty in a relationship or a deep spiritual relationship. The card indicates jealousy as well as instability and uncertain plans. It can also highlight on some obsessions or fobie. It can predict magic moment or a date.

Card can predict the problems with sleeping. It is also connected with mental disorders such as depression, phobia, hypochondria and other psycho problems that making yourself sick. Sometimes can be also relate to diseases of the digestive system and mistakes related to eating.

The Card means uncertainty so it is important which cards are adjacent to them. Caution is recommended in making decisions.