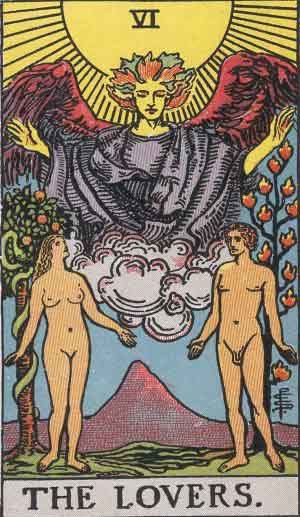 The Major Arkana card, marked with the number six.

It is not without reason that the Tarot Lovers card is marked with the number 6. Its meaning is closely related to the number six, which symbolizes care for feelings, family life, relationships and partnerships of all kinds, as well as striving for harmony in groups. In classical astrology, this card corresponds to the zodiacal Gemini, i.e. two characters existing next to each other in perfect harmony. And indeed: the Lovers card shows two naked figures: a man and a woman. Although they are opposites of each other, they form an inseparable whole. There is an attraction between them that they cannot resist. This is why the man and woman on the card Lovers in numerous decks are often united in a loving embrace. They symbolize the combination of Anima and Animus, the male and female elements. These are two primary and opposite but complementary forces found throughout the universe and which ancient Chinese philosophy called yin and yang. The relationship of these two elements is sacred, which is expressed on the card by an angel or Cupid hovering above the heads of a pair of lovers. The nakedness of a man and a woman symbolizes honesty, truthfulness and mutual trust.

Although the Lovers’ card can express passion, infatuation and fascination with an erotic nature, its basic, broader meaning are relationships of all kinds, not only those of a romantic nature. The meaning of the Lovers card may be close to the concept of Persona in Jung’s psychology, and thus express the social part of our psyche, focused on cooperation with other people and maintaining relationships with other members of society. Thus, the Charter speaks of uniting with another human being, of supporting each other on the way to achieving common goals. It may mean signing a favorable contract, concluding a settlement or establishing a cooperation that will turn out to be successful and profitable for both parties. The card reminds us that everything we offer to others – both good and bad – comes back to us sooner or later. Depending on the question asked, Lovers may also caution against making decisions for someone, against acting without consulting someone who should be allowed to choose and whose voice should be heard. This can apply to both family and business decisions. Generally, the Lovers’ card emphasizes the importance of the decisions that we have to make, or announces the necessity to make them. This card is often interpreted as a dilemma or an important life choice that we must face. In this case, each of the two characters represents a separate life path, a completely different path. While symbolically the lovers on the card are one, they are also two separate entities, each with their own individuality. The Lovers’ card in the distribution will therefore mean that we have to make an important choice, which we should make wisely. In relation to a person, it means someone who has a dilemma, who is torn between two possibilities and hesitating about what decision to make.

Card can represents places like A church, a place for romantic trysts, a park, a garden, a registry office

Keep in mind other person views and beliefs

We can do so little alone; we can do so much together.
(Helen Keller)

Reversed Lovers show unhappy love, jealousy, dangerous romance. It can mean about broken love or relationship. It can also be infidelity or even adultery. Business contract with some contractor comes to an end.

In the area of love and relationships, Lovers are an extremely positive card. It stands for emotional fulfillment, mutual feelings, romantic meetings, an engagement or a wedding. Depending on the location, the lovers may also indicate a fascination with someone from close surroundings, falling in love or a passionate romance, the consequences of which may be difficult for us to predict. The card may also mean the need to make decisions regarding a given love relationship, for example, the need to define oneself in a relationship, the need to confess hidden feelings or make a declaration of love, such as a proposal.

In questions about health, as in the area of relationships, the Lovers tab usually signifies all good fortune. It is a symbol of harmony in which our body and mind are located, so health problems should not play a role in us. However, there are times when the Lovers may indicate ailments related to the genitourinary system, such as kidney disease. It is also believed that the pair of characters on the card may indicate organs that occur in pairs in our body, such as the kidneys, lungs, testes or ovaries. Perhaps it is worth paying attention to the functioning of these organs and giving them special care.

The Lovers card is a good omen for any cooperation in the professional field. It means establishing a cooperation or signing an agreement as a result of which both parties gain significant benefits. The card tells about a professional relationship built on the win-win principle, in which there are no losers, because each party obtains the considerable profits it cares about. In addition, the card heralds the successful resolution of past problems or difficulties on a professional basis. It is also possible that we will receive a professional offer that will require us to make an important choice related to our career path.