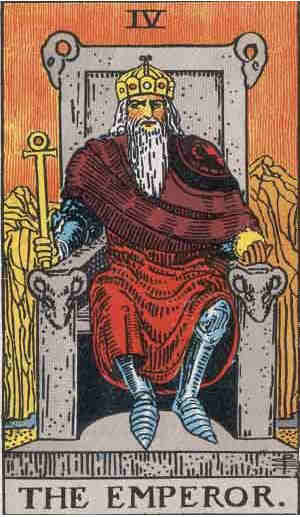 The Major Arkana card, marked with the number four.

The Emperor Card is usually presented in the form of the ruler sitting on the throne. The Emperor is surrounded by a world made by human hands. It is a world that is governed by rules, laws, and order. This Card is the force that creates laws and ensures that they are kept in balance. Card is identified with the values of fatherhood. The Emperor is a symbol of solid foundations, stability, control, respect and authority. Shows the world of civilization, the world created by human and shown in its moment of glory. Like any authority, it has its advantages and disadvantages. It can be used to bring order, but it can also become a destructive force. Anyone can become a tyrant and dictator. A good ruler is one who serves the weak and the defenseless. A good ruler is able to tame his strength and is aware of the consequences of his actions.

In a negative aspect Card speaks of improper exercise of power, weak character, lack of control over emotions and lack of determination.

The card stands for paternal love, support, and stability in the relationship. Sometimes relationships based on domination, giving whats the best betwen two people. Things move in the right direction in emotional life.

The card indicates material stability, the finances are managed by a person who knows what he is doing. In professional matters, you need to trust your skills and knowledge.