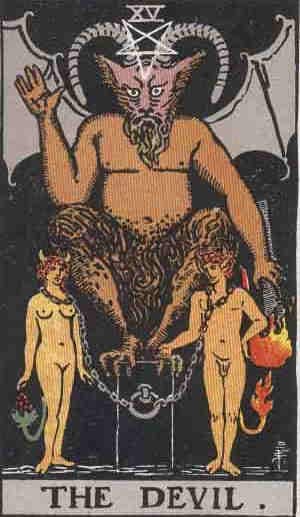 The Devil Tarot Card is, next to Death, one of the cards in the Arkana Great deck that immediately has negative associations. The zodiac sign attributed to the devil on this card is Capricorn, with whom he has powerful, slightly bent horns. It should be noted that the devil presented in Rider Waite’s deck is a kind of chimera, i.e. a creature with body parts of various creatures. And so the Devil visible on the discussed card has goat horns, a human torso, bat wings and harpy claws. Combining the bodies of different species into one being expresses the disharmony and chaos of which the devil is embodied. It is worth noting that in ancient times, virtually all mythological monsters were represented as a conglomerate of other existing creatures – an example of this is, for example, Basilisk, having a rooster’s comb and a snake’s tail.

The Devil on the card in question therefore corresponds to the classic representation of the mythical monster. Thus, he embodies the forces of chaos and the dormant danger within them. At the feet of the Devil, against a black background, we see a man and a woman enslaved by a heavy chain. They are both naked, which expresses the truth behind the play of appearances. These are people who have come under the power of the Devil. Like their master, they can spread destruction and chaos. Their bodies have transformed into horns and tails. The symbols of the grapevine and the flame accompanying human figures speak of physical temptations and addictions, the pursuit of pleasure and the delights of the body.

The Devil in tarot is a powerful sexual symbol. It suggests indulging in pleasures that are generally considered forbidden, such as extramarital affairs. The card speaks of a strong erotic fascination, which can, however, turn into an obsession and a desire to control another person. The devil is also a symbol of all drugs and entertainment that can turn into addiction, such as gambling. The card tells about the enslavement of man, about succumbing to his drives and instincts that destroy him and make him feel guilty. The devil means enslavement not only on the physical level, but above all – emotional and mental. More than once this card of the Great Arcans shows us that we are stuck in an unhealthy, destructive relationship with someone who, from the point of view of the social hierarchy, is above us. It could be a toxic parent, boss, or supervisor. The ties that bind us to this person are strong, as are the chains on the card, so it is extremely difficult to break them. However, it is necessary if we want to regain our agency and inner freedom.

The Devil’s card also speaks of manipulating and abusing us by others. In relation to a person, it means an emotional vampire who constantly diminishes our worth and feeds on our energy. After contact with such a person, we feel exhausted, frustrated and unhappy. It is very likely that we are taking our frustration out on others as well, further spreading the destructive energy represented by the Devil.

Despite the fact that the Devil is the embodiment of chaos and destruction, his presence can be read positively in some distributions. The Devil card, interpreted as advice, reminds us of healthy selfishness and self-respect. He warns against enslavement, against falling into frustration, against giving our energy too easily to others, and against rashly sharing the fruits of our work. The card encourages us to break the binding ties imposed on us by others. It states that we can no longer be exploited. It tells us to demand what is rightfully ours and to start putting our own needs first. He tells us to protect ourselves from destructive influences from outside and not to allow other people to interfere excessively in our lives.

Watch out for apparent things and check if you are not making money at someone else’s expense.

Do not give the dogs what is holy and do not throw your pearls in front of the pigs.
(Jesus of Nazareth)

The Card mean about dependence on a person or group of people, physical and mental violence and some forms of black magic. It can also mean a lack of emotional control.

With regard to interpersonal relationships, the Devil card is a sign of manipulation and intrigue. It talks about falling into a network of dependencies from which it is very difficult to break free. We may meet someone who will awaken our inner demons and activate our fears.

The Devil’s Card implies the need to work on self-love. It reminds us that love for another person will always bring us pain, if we do not learn to love ourselves in the first place.

Additionally, the Devil’s card warns against duplicating negative patterns and patterns in relationships that we have previously observed in our lives. It says that some people never change for the better. It is not worth giving another chance to someone who has failed our trust more than once in the past. The Devil’s Card advises to pay close attention to whom we offer our forgiveness to, because the person does not necessarily deserve it and will likely never appreciate our gesture.

The Devil that appears in decay carries with it negative health consequences. It is a symbol of diseases related to the circulatory system, the skeletal system or the genitourinary system, as well as problems related to sexuality. It can also mean suffering that affects an area of our psyche, such as recurrent anxiety, depression, obsessive compulsions, neurosis, and excessive stress. The card also informs that a significant change in the environment, such as traveling or changing the place of residence, may have a beneficial effect on our health.

In the areas of finance and work, the Devil’s card suggests a cash inflow at a cost. This card, strongly related to the sphere of matter, speaks of material well-being, which, however, in the long run, may turn out to be a trap for us. The devil means taking out loans and debts, the repayment of which can be extremely burdensome. For this reason, the Charter advises against making hasty financial decisions. He also discourages borrowing money from someone who could make us addicted to himself or put pressure on us. The Devil’s Card advises us to gain prosperity through our own efforts, because financial dependencies can be a great mental burden for us in the future. The devil warns against signing important contracts without consulting their content with a specialist in the field of law or economics.