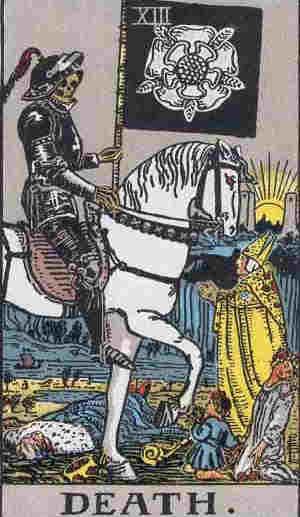 The Major Arkana card, marked with the number thirteen.

Death, numbered thirteen, is a card of the Great Arcana that is usually of particular concern. This is due not only to the name of the card, but also the accompanying visualization of death in the form of a grim reaper, i.e. a skeleton with a scythe or with another tool in hand. In Rider-Waite’s deck, Death carries a black banner with a white flower instead of a scythe. While the black color of the banner symbolizes loss, mourning and suffering, the white flower symbolizes the purification and rebirth that follows tragic events, as well as the passage of time that can heal painful wounds. The figure of Death itself is clad in knightly armor and a helmet with a raised visor, from under which a white skull with empty eye sockets peeking out. Death depicted as a knight seems to be an emissary of the higher powers. The fact that the Grim Reaper visible on the card rides a white horse with red eyes also contributes to this interpretation. The white color of the horse evokes associations with the words of the Apocalypse of Saint John, where the first of the four horsemen of the Apocalypse rides a horse of this color. Therefore, the Death visible on the card plays the role of a messenger whose task is to carry out the judgments of Providence. Grim Reaper works inevitably and inexorably. Under the hoofs of her horse, we see lifeless bodies of people of all ages, from different social strata. Meanwhile, a man in a golden robe and a tiara on his head, as well as a young girl and a small child, stand in the way of Death. Though the man folds his hands in a pleading gesture, Death remains unfazed. Its mission must be fulfilled in an unambiguous and fair manner. All people are treated identically by her. Nobody can avoid their final destiny.

The Death Tarot Card is associated with the sign of Scorpio and the deeply transforming energy of Pluto. Like Pluto in astrology, this card represents a radical transformation that can be interpreted precisely as a metaphorical death and subsequent rebirth. A decomposed Death Card represents a very strong, plutonic energy that comes into our lives. It says that something in our life has already reached its maximum level of development, has ended, has stopped functioning. It is like a faded flower that once enjoyed its beauty, but now withers and rots, poisoning its surroundings. What at some stage of our development gave us joy and happiness has now turned into an obstacle on our personal path of development. Old solutions as well as the current ways of acting and thinking stop working. Our beliefs, some of our relationships and relationships with other people must undergo a radical transformation. Something has to be destroyed in order to be reborn in a completely new form that will not resemble what we knew before. This energy is associated with growing up, with discovering new ways, with giving up what is known and safe. Such a profound transformation in our lives is often associated with a sense of loss, mourning and regret. Perhaps the current order and rhythm of our life will be completely destroyed in order to undergo a profound reconstruction. It is very likely that we will be forced to look at the areas of life that are important to us from a completely new point of view. We will discover our weaknesses and see very clearly the mistakes we have made in the past. It is possible that we will have to give up some dreams and plans, let go of the matters that have been important to us so far. Probably fate will want to throw us out of our comfort zone. The Death Card tells us that it is time to let go of our illusions and face a new reality that can ultimately have a lot to offer us, if only we show courage and accept the changes with peace.

Face with the fact that some things are ending and be open to new ones.

All people know the price of things, but only a few know their true value.
(Oscar Wilde)

Card can be a symbol of events that be shocking or terrifying. It also means about losses, failures and even mourning.

In the area of love, The Death Card tells about the end of a relationship that for some reason stopped serving us. It means a breakup or a radical change in the sphere of feelings, including the departure of one of the partners abroad. Someone close to us leaves or we decide to leave. Our hopes may be disappointed and common plans will suddenly cease to matter. However, one should not be tested into prolonged despondency over this. The Death Card promises that in time an inner rebirth will come for us.

The Death Card tells about decisions and actions that are very important to our health. Often Death occurs in a resolution as a precursor to surgery, surgery, or other health-saving surgery. The card may also suggest problems with the skeletal system as well as an autoimmune disease. On the other hand, in a positive sense, Death as an announcement of transformation means recovery from a serious illness. The card also informs about the need for a radical change in our lifestyle in order to protect our health.

The Death Card that appears on the schedule speaks of a radical change related to our professional life. It could mean losing your job or retiring or taking a disability pension. The card can also inform you about your change of business and about starting a gainful activity in a completely different field than before. When it comes to finances, the card most often predicts losses and sudden financial collapses, but of course it all depends on the accompanying cards in the schedule. It happens that the Death card still has a positive meaning. It can inform, for example, about cutting off from the toxic work environment, which has not served us for a long time, and about embarking on our own vocation path. In addition, the card warns against impure players in the professional field, for example by competitors.